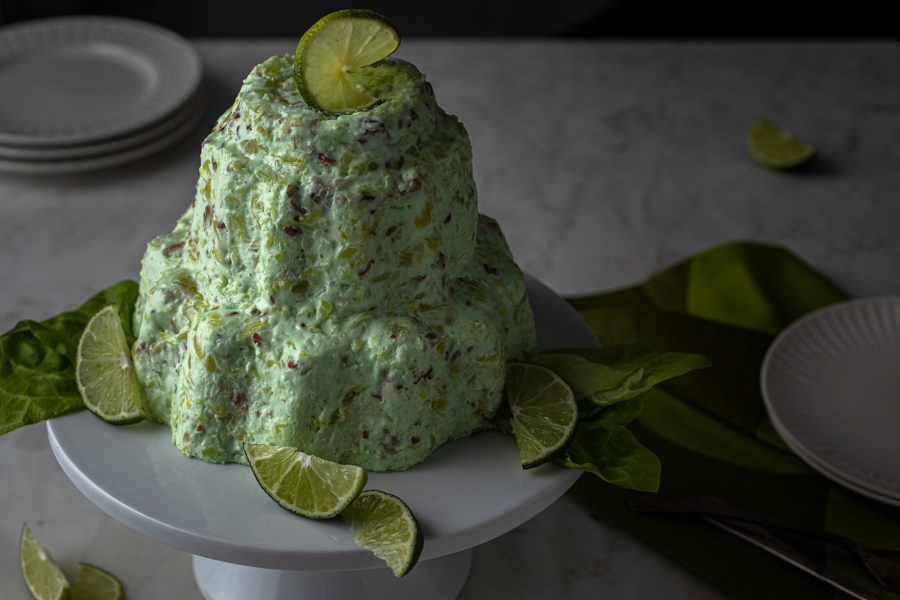 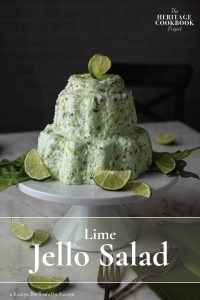 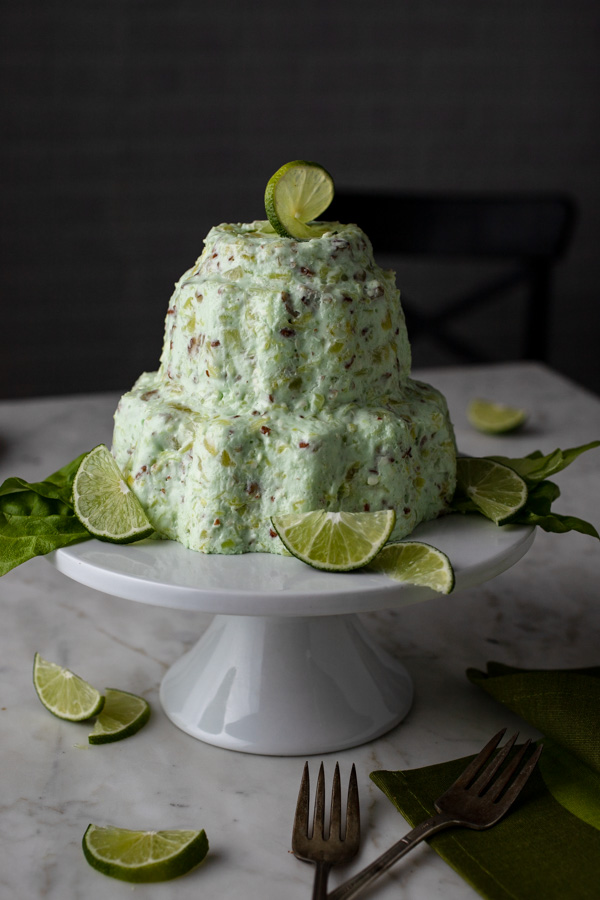 The Merriam Webster dictionary defines salad as  “a usually incongruous mixture. A hodgepodge.” I suppose based upon this, I would concede that the combination of lime jello, cream cheese, cream, pineapple and pecans does constitute a salad.

The suspension of fruits and vegetables in gelatin was introduced to us in 1905 by Mrs. John Cooke, who won third prize in a cooking contest sponsored by Knox Gelatin. Her “Perfection Salad”, an aspic studded with cabbage, celery, and red pepper, “unleashed a demand for congealed salads that has grown alarmingly, particularly in the suburbs.”, says James Beard in the 1972 edition of James Beard’s American Cookery.

This type of salad has been dubbed an American innovation. And the ingenuity of American homemakers was resolutely demonstrated during the depression. The need to stretch ingredients as far as possible and the introduction of lime-flavored Jello in the early ’30s gave the congealed salad craze a huge boost.

After the war, corporations who had profited by feeding troops processed and instant foods, turned to the American public with campaigns that promised busy wives less time in the kitchen with easy ways to get dinner on the table. The cultural expectation of a woman to feed her families was still very prevalent and slap-dash preparations that instant and processed food provided would never do.

Popular magazines of the time touted the need for “Gracious Living”.  So women redefined instant and processed foods by adding ingredients or creating impressive presentations. Salads like Lime Jello Salad fell lockstep with the concept presented by the ads and magazine articles. They could be shaped with molds, placed on a bed of lettuce, and garnished with veggies curled into roses. An impressive presentation, indeed.

So, it is with grace and ingenuity that I present to you Lime Jello Salad. 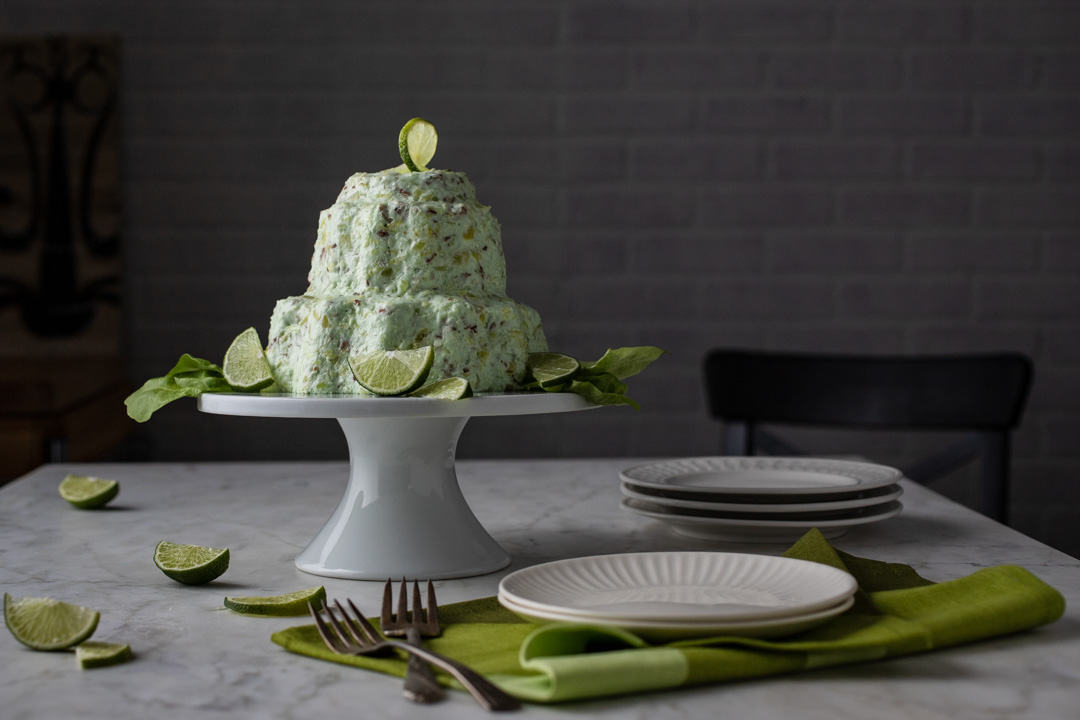 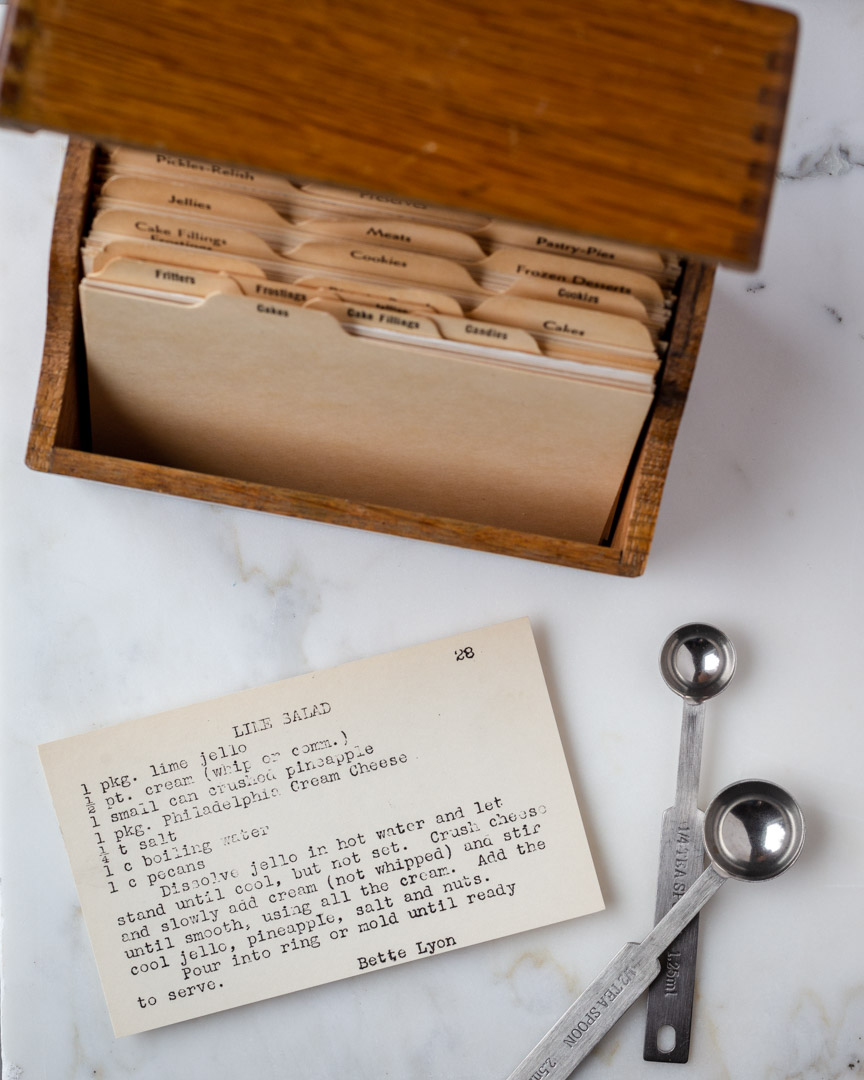