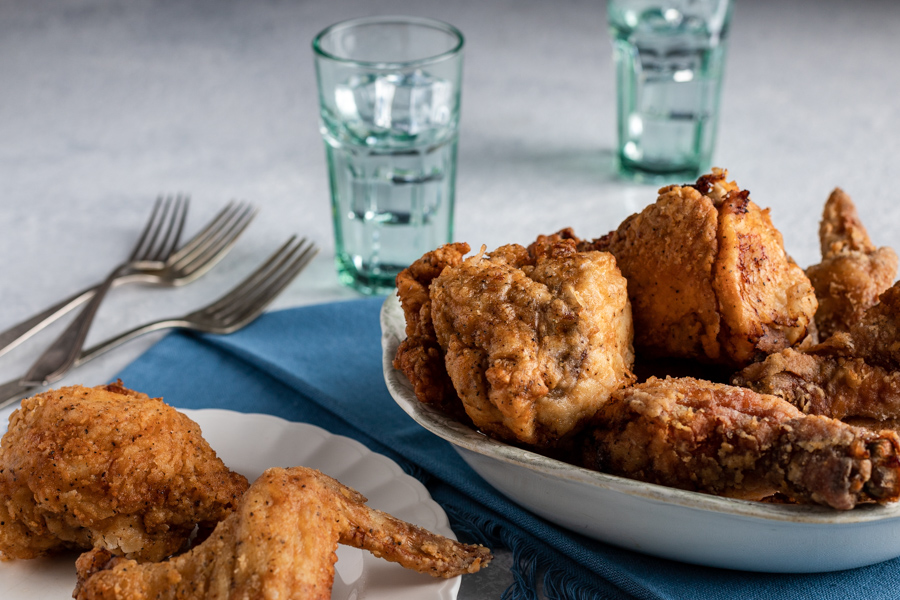 Listen as Judy recalls memories of a grandma who ran a local lunch counter, food memories of growing up in small Western Montana town, and her recollections of one of her favorite recipes, her Grandma Kennedy’s Fried Chicken. 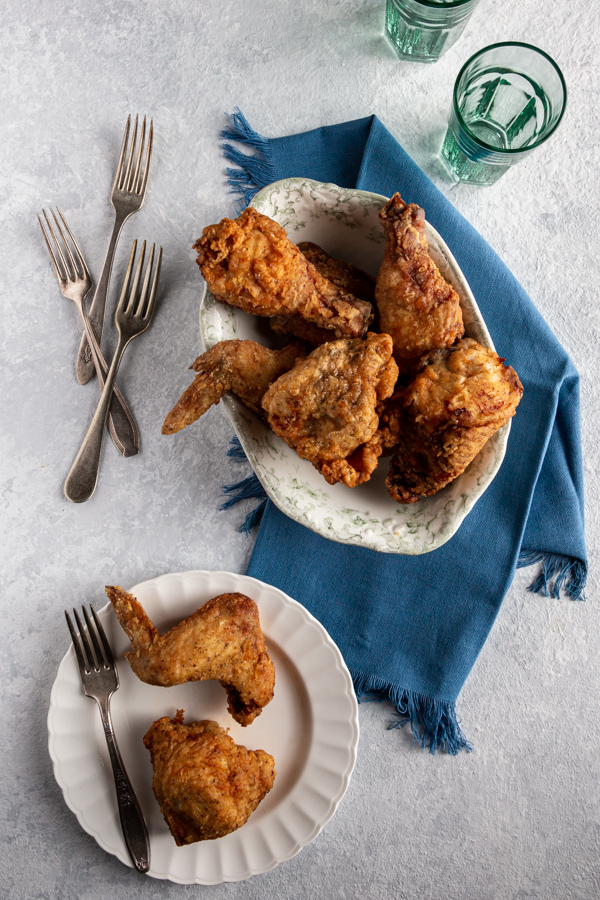 Judy Van Leuven: Food connects you with your childhood, with your family. It really is the glue in many situations.

Leigh Olson: Judy Van Leuven and I grew up together in a tiny little town in Western Montana… population… when we were growing up… around 3,000 give or take…The biggest city closest to us was 18 miles away… population 10,000… and in those days, it was a special treat to go “into town”.

Before the malls and McDonalds, we would stop at the five and dime for a sandwich at the lunch counter.

Judy Van Leuven: My grandmother, um, worked at Alton Pearce Drug  a couple of decades.  She managed the lunch counter for many of those years. She made everything there from scratch, she even made homemade mayonnaise before we called it fancy names like aïoli.  My earliest memory of going in there, sitting at those booths that they had in the back, I must’ve been about four or five.My mom would take us in there to visit grandmother. We didn’t come to town, what we’d call going into town to the big city very often. But when we did, we would swing by there and visit my grandmother.

Leigh Olson: Welcome to The Heritage Cookbook Project Podcast, where we document and preserve heritage by connecting with cooks across the country who share food memories, family recipes and a little bit of themselves. And I’m your host Leigh Olson.

Judy Van Leuven: My mom also worked at Alton Pearce Drug She wanted to do was to scoop ice cream, the ice cream scoop girl when she was in high school or younger. And um, she was so short. She was five foot even. She was so short, she couldn’t reach into scoop them so she couldn’t get the job. So she ended up doing the deliveries.

That’s actually how she met my father. She was delivering drugs to the funeral home. What’s it called The Wagner Funeral Home, I think at the time. Um, and he was working for Wagner there just like a few blocks down from Alton Pearce Drug and she would deliver Are there any in those days they would deliver Pharma pharmaceuticals to the homes and my mom would deliver them and so that’s how she met my dad.

Leigh Olson: Having a grandmother who was skilled in the kitchen doesn’t always mean that her children will be blessed with the skill or even interested in it. And new products and trends being introduced by brands touting ease and freedom from mundane tasks can take a   further toll.

Judy Van Leuven: My mother was the worst cook in the entire world didn’t take up my grandmother’s passions. Her sister Mary Ellen was a fabulous cook. But mom didn’t want to cook at all.  She was from that era where pre-packaged meant you, made it, right?

I had a real diet of fast food growing up, which was not a healthy thing because I still have a craving for it. You know? I still like it sometimes and I have food memories of going to fast food. Mostly Food memories with my mother.

Leigh Olson: Judy’s and my home-made food experiences really… paralleled each other… and were definitely influenced by the pre-packaged food era we grew up in. And let me tell you, it was a red letter day when McDonald’s came to the big city 18 miles away.

But with a Grandma that lived so close, Judy and her sisters and brother did get to experience some wonderful homemade cooking.

Judy Van Leuven: My grandmother, Nelly Kennedy, she was really a good cook. She made all kinds of great food. I think she made fried chicken every Sunday and that was our favorite things she ever made. Grandma Kennedy’s fried chicken recipe is the best in the entire planet.

We would help her cook her fried chicken, but you know, she never had a recipe written down. Everything was in her head after doing it for decades.

She would put it in a bowl with I’m cover it with butter milk and sliced raw onions and just white onions. I don’t think it mattered what kind she had and she didn’t even show that sit in that overnight. And one thing I remember it really strongly about her chicken and it was so heavily peppered. She liked to put black pepper and everything.

She would mix the flour with equal parts of salt and pepper. So basically she had like a tablespoon of salt roughly. She’d have a whole tablespoon of black pepper in there as well. I always use onion powder and garlic powder as well. I’m not sure if she used those. I know she used a little paprika because there’s always a little bit of color and she always. We always did it in a brown paper bag and she shook the. Shook the chicken pieces really well.

She always had a big tub of Crisco because she made biscuits and all that stuff as well. And she also had the big one gallon can of  bacon fat of course on the stove. Never refrigerated. Right. It was always on this stove where she’d dump all of her grease and her bacon fat.

I think she used about equal parts of bacon, fat and equal parts of Crisco. She would put, you know, put that in the, in the pan to cover the chicken, maybe about half way up. So maybe it went up about half an inch I would guess in the cast and the big cast iron pan she had. She made sure to cook it ’til the, the outside wasn’t just golden brown. It was more, it was not burned and didn’t go to the level of effort, but it was always kind of a darker brown.

Leigh Olson: After the break trading lunches, rediscovering the value of family recipes, and the right way to eat fried chicken.

Sponsor Ad Read: This episode of the Heritage Cookbook Project podcast is supported by Bob’s Red Mill. When you’re making those treasured family recipes, don’t leave the quality of your ingredients to chance. Visit bobsredmill.com to find out more about this employee owned company, their products and how you can fill your pantry with them with their products, not their employees.

Leigh Olson: Growing up in Western Montana meant lots outdoor activities including fishing. And in the fall the main attraction for fishing was snagging the salmon that were running in the Flathead River.

I would have the same thing every day. Just bologna on Wonderbread. with butter. And I would say to, my mom, “please don’t put butter on my bologna sandwich. I want Miracle Whip.” And she would say, “OK, honey,” and then the next day I would get a bologna and butter sandwich. Every single time. She never remembered to put the Miracle Whip instead of the butter. And so I would try to trade that bologna sandwich for those smoke fish every chance I got. And the other kids who never got Bologna, loved it.

I just remember trading those for that smoke fish and thinking that I was the luckiest person in the world.

I didn’t start loving cooking until I was probably in my thirties. I don’t think that I recognized that that had any value.I really wanted to get out of that area. I knew I didn’t want to live in that area and I wanted to have a good job so that I could go to something else and being a cook and you know, doing anything like that, it didn’t even occur to me that, that had any value at all. It’s really a shame.

So I never even thought to bother to ask her to teach me things or just show me things when I was in high school and then in my early twenties. And it’s really unfortunate. So I’ve worked really hard to try to duplicate the recipe.

Leigh Olson: When I asked Judy if there was anything else that she wanted to add about her Grandma Kennedy or the Fried Chicken recipe, she started to giggle… and  Jody, is Judy’s twin sister.

Judy Van Leuven: She was scary. She hit John one time. Jody’s husband.(This is funny because it relates to the chicken. So we had bought her fried chicken probably from Kentucky Fried Chicken and we brought it up to the home she was living in a, in The Manor there for the last few years of her life. Jody’s boyfriend or husband now, John, was trying to eat it with a fork and knife for some odd reason and she hit him so hard with a cane and said, pick that up and eat it that’s not how you how you eat chicken. You pick that up and eat it. {Laughing}

Food is so much about our culture and our love and our families.  I would love to stand side by side and be able to cook with my grandmother.

Leigh Olson: I hope that you enjoyed Judy’s story about Fried Chicken and rediscovering the importance of family recipes. If you want to hear more stories like this, please subscribe wherever you get your podcasts.

The full recipe for Grandma Kennedy’s Fried Chicken can be found at theheritagecookbookproject.com and don’t forget to register for access to the printable cookbook pages. Cheers.

The Heritage Cookbook Project Podcast was produced and edited by me, I’m Leigh Olson.

The Heritage Cookbook Project will be back in two weeks on September 24 with Episode 11 – Apple Strudel & Birthmothers. Until then, thank you so much for listening and make sure to ask your grandmas to write down their recipes.

For Judy Van Leuven, her Grandma Kennedy’s Fried Chicken recipe is a way to reconnect with her childhood and family. It’s a recipe that appeared on the Sunday Supper table every week, but never on a recipe card.

Listen as Judy recalls memories of a grandma who ran a local lunch counter, food memories of growing up in small Western Montana town, and her recollections of one of her favorite recipes.

Thank you to our Sponsor Bob’s Red Mill for keeping my pantry full of fabulous flours and baking products! 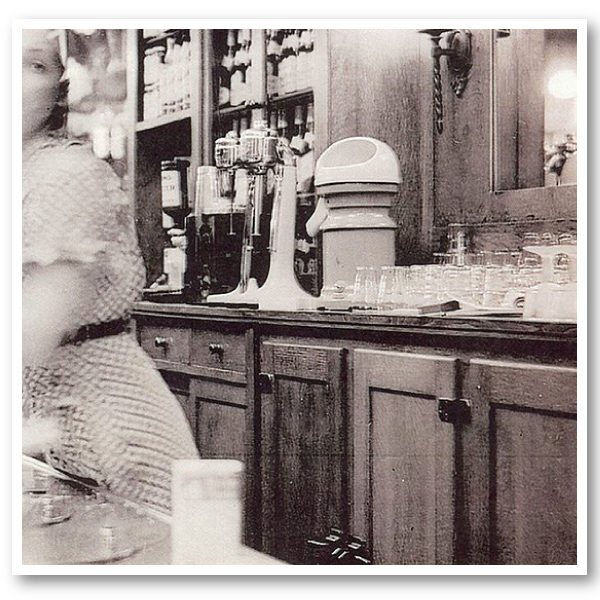 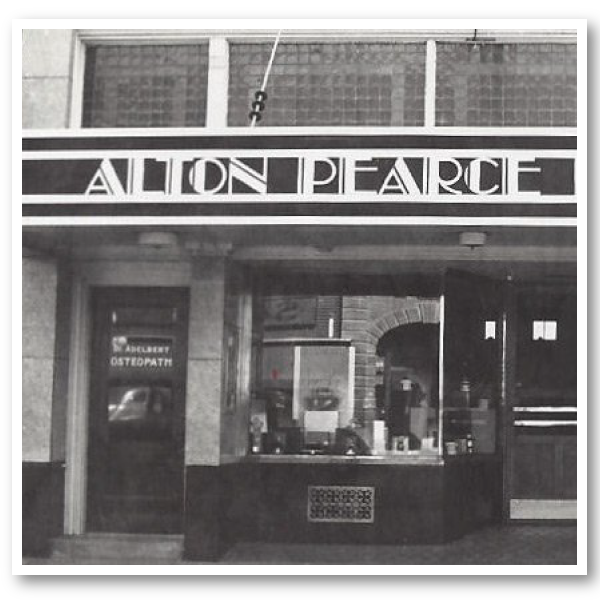 Print Recipe Rate Recipe
Prep Time: 15 minutes
Cook Time: 1 hour
Marinating Time: 12 hours
Course: Main
Cuisine: American
Servings: 6 people
Calories: 527kcal
This recipe for fried chicken has been described as “the best on the entire planet”. It’s hard to argue with a recipe that’s been made as many times as this one has.

Food connects you with your childhood, with your family. It really is the glue in many situations. 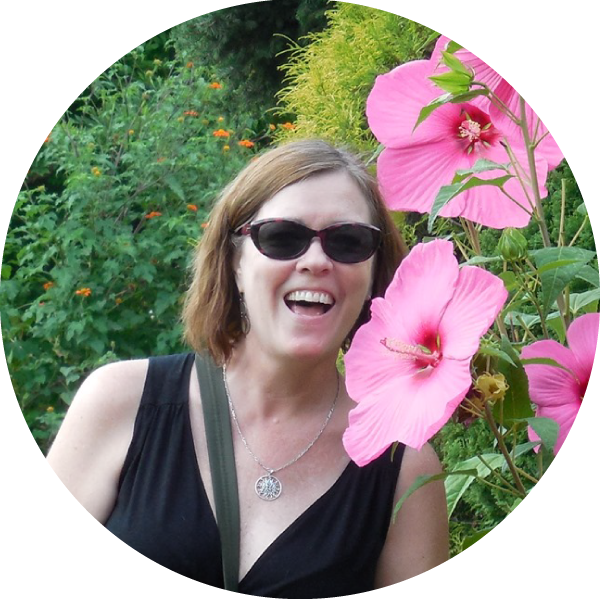