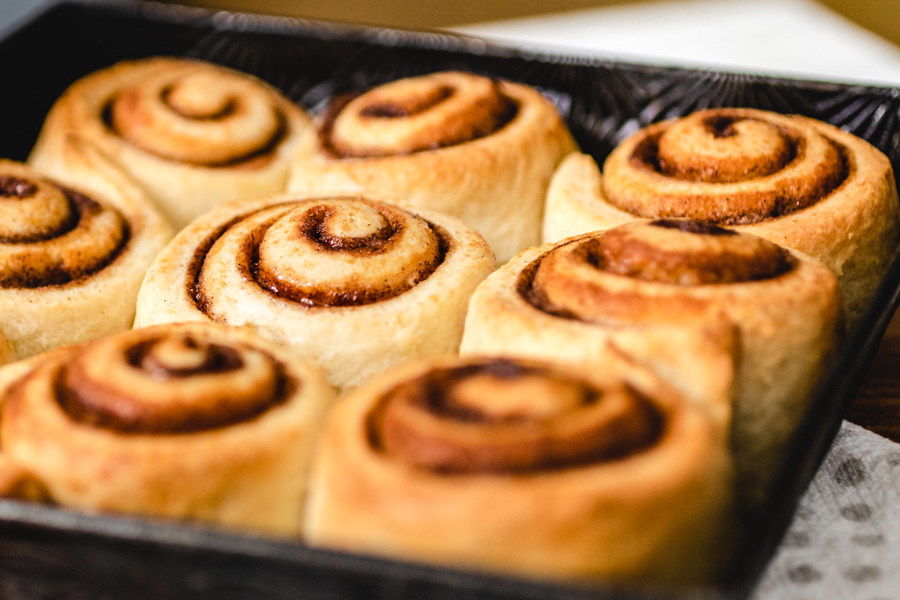 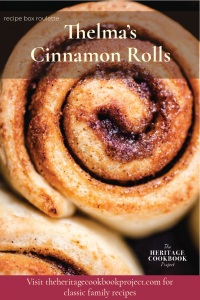 Thelma’s recipe for easy cinnamon rolls relies on a substantial amount of melted butter brushed on top to create a rich, sweet treat whose origins include tall tales and cultural adaptions. 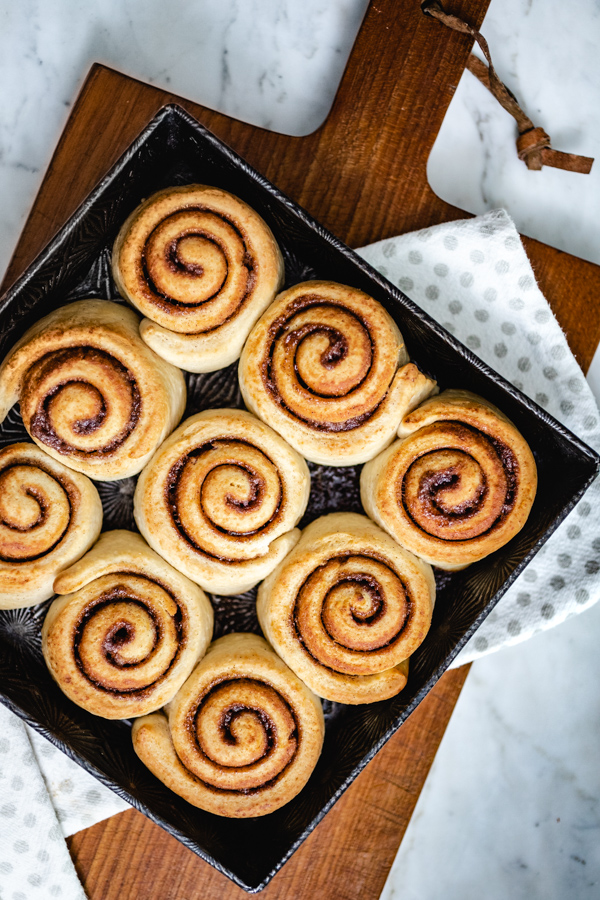 Until early in the 16th century, the origins of cinnamon were closely guarded by spice merchants. Tales of gathering the exotic spice, as outrageous as the price of the cinnamon itself, were crafted in order to maintain the merchants’ stronghold.

One of these stories, as documented by the Greek historian Herodotus, involved gigantic birds that collected cinnamon sticks and stored them in their nests high atop mountain peaks that were impossible to reach by mere humans. According to Herodotus’ account, cinnamon traders would leave huge pieces of ox meat for the birds below the nests. As large as the nests were, they couldn’t hold the weight of the meat and would collapse to the ground carrying with them the cinnamon sticks which were promptly collected by the courageous spice merchant.

Another tall cinnamon tale reported by Pliny the Elder – the Roman philosopher, not the beer – indicated that cinnamon was carried on magic rafts powered solely by “man alone and his courage”.

Portuguese traders discovered cinnamon in Ceylon, present-day Sri Lanka, in the early 16th-century bringing with the discovery hundreds of years of wars, occupations, and slavery for this small island kingdom. By the 19th-century cinnamon was being cultivated in other parts of the world and was no longer the expensive, rare commodity it had once been.

The Origins of the Cinnamon Roll

Whether you’re British, German or Swedish, you may lay claim to the origins of the cinnamon roll. The butter enriched dough, foundational to cinnamon rolls saw its origins in Northern Europe around the 18th-century. In turn, each country developed the rich dough into something uniquely its own. The British rolled the dough up with currants, sugar, and butter and called it the Chelsea bun, and the Germans used raisins and nuts rolled into sweet schnecken, both of which made way for the kanelbulle, Sweden’s iconic rolled bun with cinnamon and sugar served for fika.

So, as you make Thelma’s Cinnamon Rolls, rejoice in the fact that you don’t have to carry large pieces of ox up mountains or power a magic raft with your courage alone. But above all recognize the sacrifices made and the creativity employed by so many in order that you may savor this uniquely warming sweet spice enveloped in a buttery, rich dough. 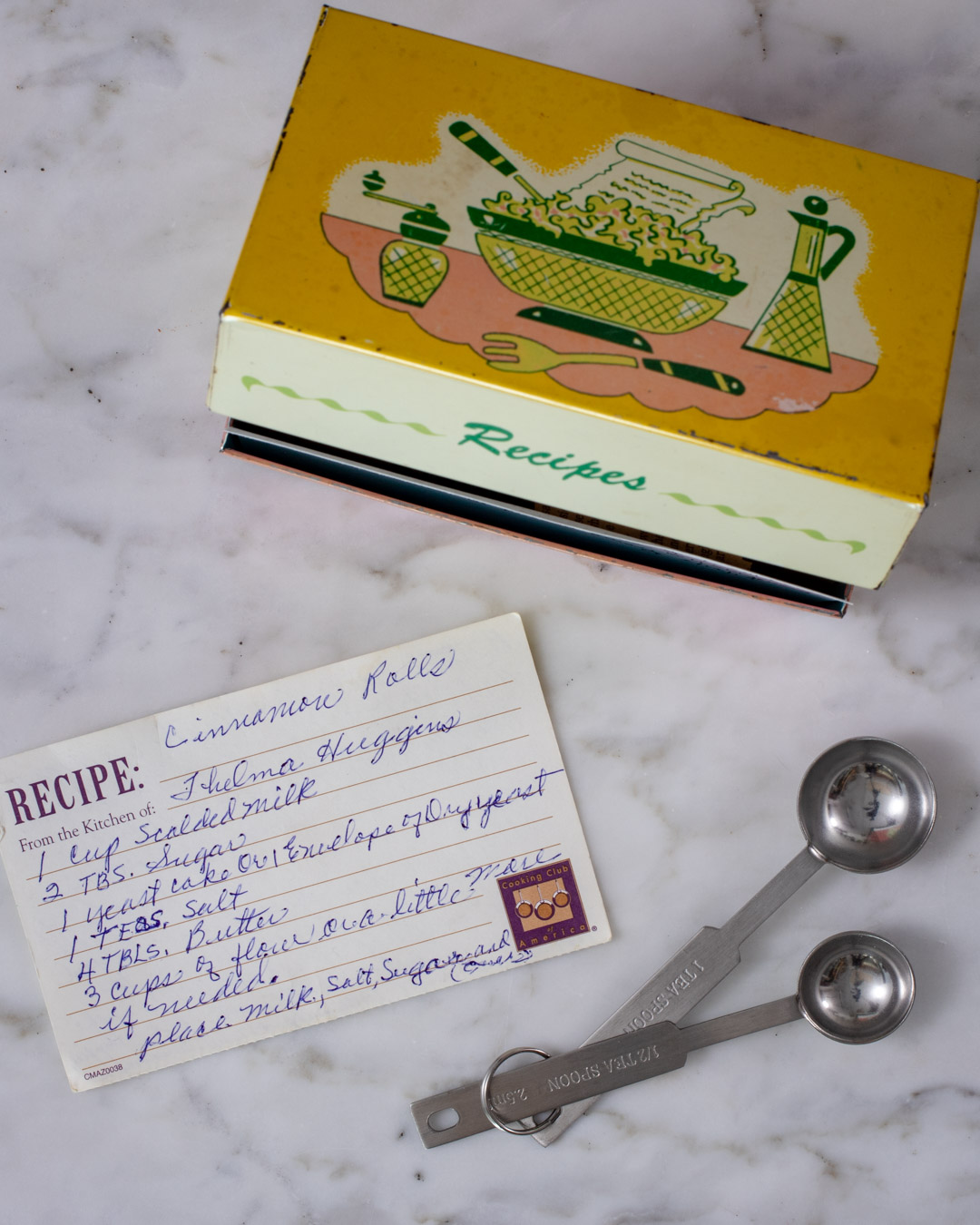 This website uses cookies to improve your experience while you navigate through the website. Out of these, the cookies that are categorized as necessary are stored on your browser as they are essential for the working of basic functionalities of the website. We also use third-party cookies that help us analyze and understand how you use this website. These cookies will be stored in your browser only with your consent. You also have the option to opt-out of these cookies. But opting out of some of these cookies may affect your browsing experience.
Necessary Always Enabled
Necessary cookies are absolutely essential for the website to function properly. This category only includes cookies that ensures basic functionalities and security features of the website. These cookies do not store any personal information.
Non-necessary
Any cookies that may not be particularly necessary for the website to function and is used specifically to collect user personal data via analytics, ads, other embedded contents are termed as non-necessary cookies. It is mandatory to procure user consent prior to running these cookies on your website.
SAVE & ACCEPT
274shares